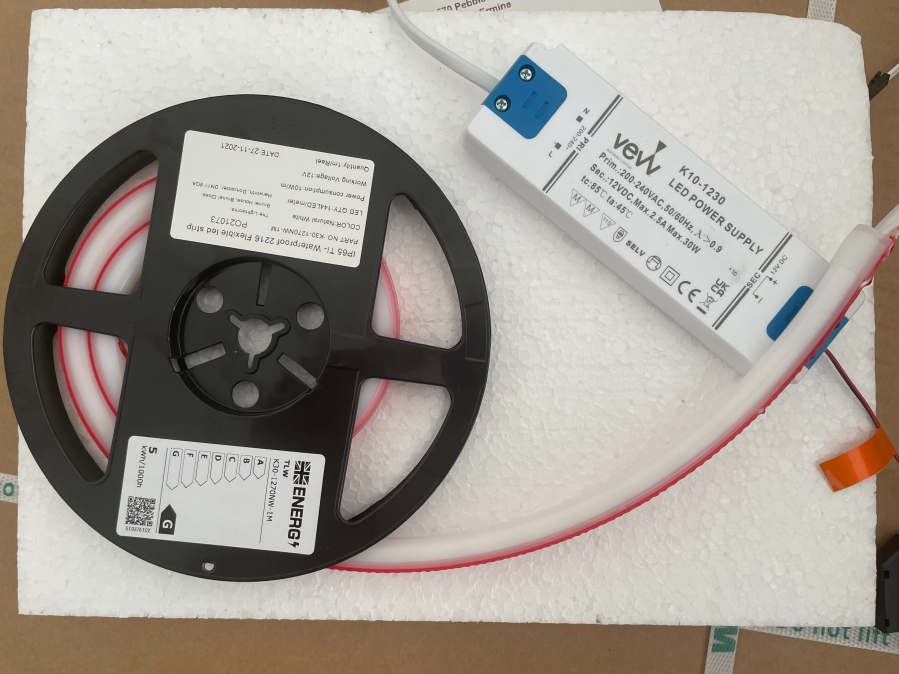 It’s almost 30 degrees Celsius and we’ve just finished checking in over 100 boxes from Friday’s kitchen delivery. Aside from one or two discrepancies everything seems to be just about in order ready for installation to begin tomorrow morning. It’s been 7 weeks since we last had a “proper” home-cooked meal in our own home and words can’t describe how relieved we are to finally be within striking distance of the finished install.

Delivery also means the electrician can now start with fitting the lighting. Second fix started last week, but no lamps could go in until the under-counter lights were delivered along with the kitchen, this way ensuring all lamps are the exact same shade of natural white. Who would have thought so much drama could come about from whether the lights were natural white, warm white, cool white,  hot white, ice white, swan white, apple white or even paper white (disclaimer – I may have made some of these up).

The lighting has been one of the most complex, influential and frustrating part of this build due to how sensitive to light I can get. When we first spoke to the builder and electrician about this, neither of them seemed too concerned about it but as time has gone on, one element has caused more conversation than any other. Essentially, the lighting has been split into four zones, some of which are simple on/off switches and others are dimmable. All except one zone are typically found in most kitchens and dining rooms. The ceiling spotlights (or downlights), the under-cabinet work lights and the feature lights about the island and dining table are all self-explanatory and have been fitted without a hitch. The difficulty has come with the uplighters. Broadly speaking, uplights are nothing new, many homes having a pair of wall lights that shine upwards to light a section of a wall and ceiling. In hindsight, this would have been far simpler for everyone concerned and probably significantly cheaper!

For us, the uplights are a single continuous strip of light going around the wall and shining up the wall and across the ceiling to make one uninterrupted wash of light across the ceiling. The purpose of this is to create a wash of indirect light, much easier on my sensitive eyes than the more direct downlights. As well as the sensitivity requirements, these wash lights will provide a calm, ambient environment where we can relax long after William is fast asleep.

It’s proven quite a challenge for both the electrician and builder to make the necessary preparations in readiness for second fix. First and foremost, it’s been necessary to determine where to position the LED drivers so they can be easily accessed just in case one were to fail. The second challenge has been to put the wiring in place so they can be switched on and off from multiple locations around the room. As if this wasn’t enough, by far the biggest headscratcher has been how to build the necessary containment to run the light strips along the bottom of the newly-installed bulkheads.

After a bit of Googling, I managed to find some cornice that seemed to do the job but sadly, when it arrived it quickly became apparent that it would not work and so, like most of this build, Richard tasked his carpenter with creating something bespoke.

At this point we really should have admitted defeat and accepted that it just wasn’t to be and, if it wasn’t for how affected by direct light I can get, especially on one of my many Bad Eye Days, we probably would have done, so, once again, it was down to Richard to come up with a plan. We’re yet to see the finished result but, like so many elements of this build, we’re confident that the solution will very much compliment the vision of this accessible build.

The guiding principle of this project has been to create an accessible, clean and calm family space which has all the adaptations needed for me to use it independently no matter how far my sight degrades thereby proving that it is possible to create a disability-friendly kitchen that looks and feels like any other kitchen. We have been fortunate to have had support from our local council’s sight-loss orientation and mobility team, resources from specialists such as the Thomas Pokington Trust and trades sympathetic to our needs that we stand a good chance of achieving our goal.

The whole journey has been stressful and exciting in equal measure; each element has needed careful consideration and design, highlighting the challenges disabled people have in these types of projects to end up with something that is more than just functional.

So I hope you’ve enjoyed going through this build as much as I have and I can’t wait to share the finished product in the coming weeks. But, for now, I wish you a Happy Sunday.